Trees really do lose their leaves in Italy. At least a few do. A very few. I stand corrected.

I noticed such this past weekend as I toured some of the local towns in my rental car. For only eighteen dollars per day I was able to get an SUV similar to my Hyundai Tucson at home. Brand new, with all the accoutrements, I was stylin’.

It felt good to be able to drive. Using public transportation puts one at the mercy of train and bus schedules. Now, I could come and go as I pleased for the weekend. And something else I noticed, I seemed to feel more at home with this sudden freedom. As an American, driving is such an intimate part of our culture and our psyche that, being without it, for me at least, made me feel somewhat less connected here on the Italian coast. 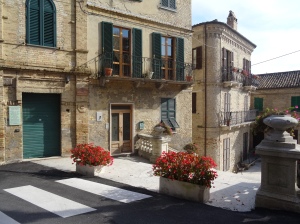 Be that as it may, I started out. My first town was Colonella. My aunt’s nephew, Guido, had taken me to this town last Christmas. Only six miles away, this was only my second visit there. I had been enchanted by the piazza strung with lights as we walked down the alleys and streets in the brisk winter air.

Colonella, like many of these old cities, is located on a hilltop. These towns dot the landscape throughout Italy. Many, if not most, were former kingdoms of various sizes. Indeed, the reason they were located on hilltops was to provide safety from the marauders as well as a lookout for their enemies. 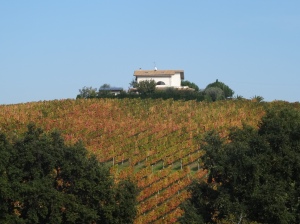 The drive to Controguerra is gorgeous.

I walked and walked all around Colonella looking for the piazza that Guido and I had visited. However, we had entered the town from the opposite side, it had been night and my usual stellar personal GPS hadn’t been turned on that night. This particular day I walked all around Colonella, snapping photos. Apparently I had found the piazza, but it sure looked different.

From Colonella I had planned to drive straight to Acquaviva Picena, a city suggested to me by many people including my cousins. As I drove along the ridgeline, though, I found myself approaching another town, Controguerra. 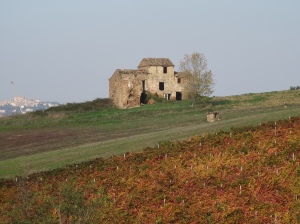 Abandoned farmhouse near Controguerra in the province of Abruzzo.

The main cathedral in Controguerra

A bit larger than Colonella, Controguerra did not impress me as much so I took fewer photographs. After leaving Controguerra, I drove down the hill, into the valley to hit the northern hill towns. I would now be in the province of Marche as opposed to Abruzzo.

Again, my goal was Acquaviva Picena, but I decided along the way to hit other towns. These communities–Ripatransone and Monsampolo–I have passed for years on the freeway. I always saw the signs but never visited. Now I would.

Monsampolo was another small town, similar to the Colonella and Controguerra. Not a whole lot to see. Cathedral, piazza, beautiful views, a handful of statues. But nothing that really blew me away.

Ripatransone was breathtaking, however, Driving up the winding road, I could see the town in the distance with its church clock tower. As I drove up the side of the mountain to Ripatransone, I saw the fortress walls that protected the city when it was a separate entity. 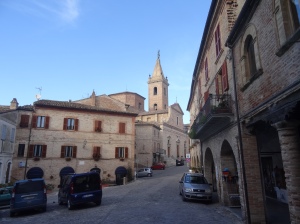 When I entered Ripatransone, I took the first street that seemed to lead up to the church. In ancient times, the church was always in the main square. It was the center of government, religious worship (obviously) and social gatherings. The towns spread outward from there.

Ripatransone was gorgeous from every angle. The city seemed to have been scrubbed clean. As a matter of fact, it appeared to be younger than other communities. In observing the building materials of the structures, the brick seemed to be of a better quality and less weather-worn. Perhaps this community was wealthier than others which was why the brick seemed so pristine. 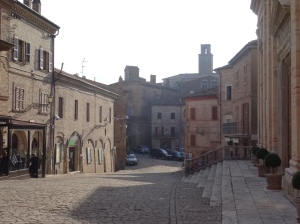 I have noticed one thing about these hilltop communities. They seem to be quite wealthy. It is just my opinion but it appears to be true. The buildings are usually immaculate, the statuary in good condition. Graffiti is practically non-existent and the homes seem to be of a very high quality. Many of the communities in the valley are newer, reflecting more recent growth and development and feature greater amounts of graffiti, trash and just a general unkempt appearance.

It was in Ripatransone that I went hog wild with the pastries, my obsession. Stopping at one tiny pasticceria, I peered into the window at the delights proffered to anyone who dared step inside. I resisted and continued walking down the street. At the end of the street, there was nothing left to see which required me to turn around and pass once again the temptress herself–Italian pastries.

I want the entrance to my house to look like this.

This time I submitted to my carnal desires. However, I am proud to say that I only bought two chocolate and cream-filled squares along with a latte macchiato.

I wish I could say I was as disciplined at the second pasticceria I saw. I purchased four pastries there. I would have bought more, but a group of people kept whispering and looking at me. Occasionally I heard “Americano” and “freddo”.

As everyone was bundled up in overcoats and scarves, they obviously were talking about me and my usual attire–Levis 501 jeans and a tank top. They were freezing in 65-degree weather; I was sweating. I tried to tell myself they were impressed with my biceps but my insecurities wouldn’t allow me to do so. Grabbing my four pastries, I scurried out the door.

I suppose their gossiping was good for me–and my love handles.

After Ripatransone, I drove to the fortress of the city of Acquaviva Picena, my ultimate destination. It was not what I expected. Perhaps I had built it up to be something sensational from all the comments I had received. But, after Ripatransone, Acquaviva, while beautiful, was just so-so in my opinion. However, I think I should probably re-visit before I leave.

Nevertheless, I fully enjoyed walking the streets and admiring the architecture, the views and the atmosphere. Oh, and did I mention the windows, doorways and alleyways? I was in seventh heaven the entire day.

Altar in the Church of St. Nicolo in Acquaviva PIcena

After completing my circuit, I found myself near the seashore. I decided to drive to my apartment and get cleaned up and head to Villa Pigna, near Ascoli Piceno. Since I am leaving in a few days for good, I required sustenance and that sustenance had to be olive d’ Ascolana #olive d’Ascolana–stuffed olives. I ordered two sides of the olives and two plates of seafood pasta.

Yes, I’m a pig. Yes, I’m a glutton for Italian food. And I don’t care. I’ve lost seventeen pounds during my expat stay in Italy. I’m willing to gamble a bit.

The view from Acquaviva Picena