After the whirlwind tour of Rome, Ascoli Piceno and Tuscany with my friends from Oregon, I took the train to Turin to see the opening match of the season for Juventus, the Italian soccer league. My cousin, Sergio, is the HR Director and he had asked if I had been interested in attending. Of course, I said yes.

Sergio picked me up at the train station and took me to my hotel where I could rest and freshen up before the game. Attending the game at the Juventus Stadium in Turin was an experience. The construction of the stadium was such that the roar of the crowd was almost frightening. I watched the huge flags waved by the fan base and, along with the cacophony, it created a sport experience that sounded violent but was just different from anything I’ve had in America. 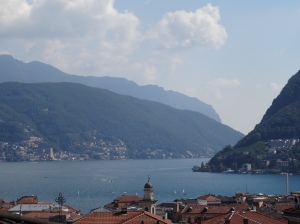 View from the patio of my Airbnb flat in Lugano

Juventus lost the game 1-0. Sergio was stunned and I was disappointed. Last year had been their best year ever and the team had not lost a game in this, their new stadium since it was built five years ago. Sergio immediately concluded that I was a jinx. 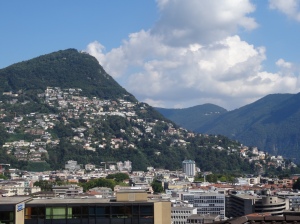 Another view from the patio of my rented flat in Lugano.

While in Turin I decided that I would not travel back down to Alba Adriatica. In observing my schedule for my last couple of months in Europe, I opted to take the train to Lugano, Switzerland.

I had never been to Switzerland. Since Turin was only about two hours away, I figured, “Why not”? The train ride was smooth, although the weather didn’t cooperate. Coming off three months of extreme heat and humidity, the cool weather and clouds was a nice distraction.

Lugano was pretty much everything I expected. Because it’s Swiss, everything functions with the precision of a Swiss watch. Because it’s mostly Italian speaking (being near the Italian border) I was able to converse easily. 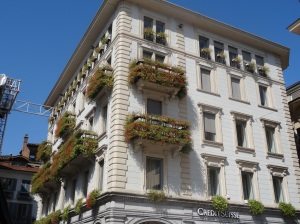 The buildings in Lugano are beautiful.

And, because it is heavily influenced by Italy, just as the French and German sections of Switzerland are heavily influenced by their respective sectors, people tended to take time off in the afternoons. However, they were a bit less inclined to do so since Lugano is a large city and a tourist center.

The city is beautifully situated at the base of the Alps along Lake Lugano. The lake is lined with broad boulevards, verdant parks splashed with colorful flowers and expensive apartment buildings. 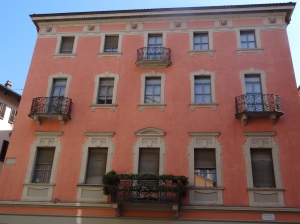 Lugano itself is a very affluent city; actually, all of Switzerland is wealthy. The society is highly educated, highly literate and quite homogeneous. Per capita income is among the highest in the world as is the quality of life and safety of its citizens.

As I walked around the center of Lugano I was surprised at the wealth. Lugano is a city I had only vaguely heard of. The downtown was heavily populated by banks, restaurants and clothing shops. All the designers were represented: Hermes, Cartier, Prada. 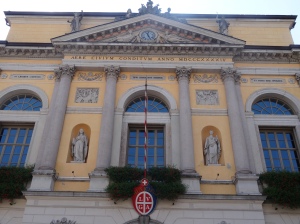 My hostess, Soy was a recent college grad from South Korea, preparing to move to Berlin for her new job. She couldn’t have been sweeter. She showed me around the downtown so I could get a feel for the city. While I wasn’t in Lugano for a long time, we were able to have a couple of very interesting conversations.

Soy was fascinated that I didn’t fit her impression of the “typical American”. I was running around town, looking at everything, making plans for Liverpool and Lviv. She expected me to just lie around and want to do nothing except watch television. I had to admit that the impression she had of Americans was a revelation to me. Most people usually just consider us to be insufferably arrogant jerks. 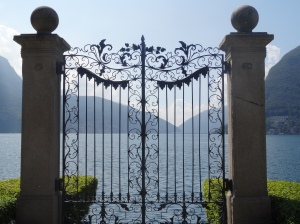 She also couldn’t believe my age and that immediately endeared her to me forever.

In walking around Lugano, I found that the city is horribly expensive. The equivalent of a Quarter Pounder with bacon meal at McDonald’s was sixteen dollars. A Whopper at Burger King was nine dollars. I always look at fast food prices as a barometer because it gives people a good idea of what things cost. 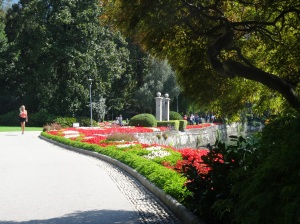 I opted to have a pizza one night along with two bottles of sparkling mineral water–$24.50. The next night I found a restaurant with fantastic spaghetti Bolognese. Along with another bottle of sparkling mineral water and an espresso, the tally came to $24.50. It was impossible to find anything that wasn’t expensive. Soy told me to essentially double the prices I pay in Italy. For the spaghetti, I paid triple the price in Alba Adriatica. But that’s Switzerland–very expensive.

The visit to Lugano was last moment. Initially, I had thought I would trot across the border, check “Switzerland” off my bucket list, and return to Central Italy. As I looked at my schedule I realized that I needed to get on the stick if I were to see everything I want before I return to America. 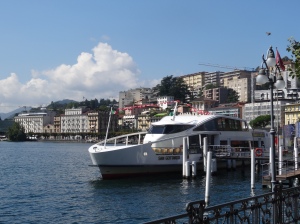 Along those lines, I decided to go to Liverpool now. I’m not dressed for it, though. The weather has been rainy and cool–with temperatures in the seventies. I’m running around with khaki shorts and tank tops so I’m sure I’ll need to fork over some dough for a light jacket. I can’t wait.