As my visit to Krakow winds down, I finally made the trek to Auschwitz. Aleksander, my host, had warned me that Auschwitz was disturbing. He was right.

Main building upon approach to Auschwitz

I had to take a bus from Krakow to Auschwitz. The ride took about seventy-five minutes and cost the equivalent of, you guessed it, four dollars. The bus was not quite sold out. Because I had gotten up to grab the early bus after only three hours’ sleep, I attempted to catch a snooze before arrival.

We pulled into a large parking lot full of tour buses. I couldn’t get over the irony of several thousand tourists per day filing through a human extermination camp. While it seems almost like a form of gallows humor, it is also encouraging to know that people want to be informed about one of the most heinous acts of barbarism in the history of mankind.

There were two lines to get into Auschwitz—one for groups and one for individuals. I took the latter. There is no admission fee. All you pay for is a headset if you want to hear a guide walk you through the camp. At the very beginning is a video that was shot the day after the camp was liberated. I have to say that I’m disappointed in myself for not watching it. Aleksander told me it was gripping. I had seen some video footage of the camp on television and in documentaries. I think, though, that I should have watched this particular one. 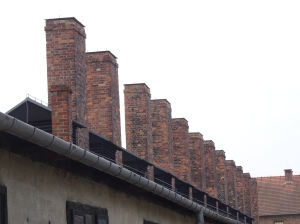 The main entrance to the actual concentration camp at Auschwitz has Arbeit Macht Frei written over the front gate which means “Work Makes You Free” in German. The camp is surprisingly well-preserved. The buildings are almost hideously attractive—nice brick structures that could resemble turn-of-the-century apartments in any American city.

I noticed as I walked that the streets were not paved and were very uneven. The monsters behind the killing machine at Krakow spared no effort in making certain that life was as hellish as possible. Since victims were shoeless or had terribly worn shoes, even standing in line would be difficult for them with the rocks jutting out of the ground. 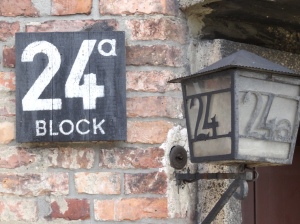 Auschwitz is not terribly large. I counted about a couple dozen buildings. Of course, I’m not sure if there were many more; most likely there probably were because the monsters (“Nazis” is too complimentary) began destroying evidence of their atrocities as the Red Army from Russia and the Allied armies began closing in. The monsters knew their fate was sealed so they attempted to eliminate all vestiges of their depravity.

Birkenau, another location of the Holocaust, is about three miles away and ultimately became the main killing camp when it was determined that Auschwitz was too small and inefficient in murdering large numbers of people.

As I walked down the streets, I tried to wrap my mind around the fact that hundreds of thousands of people had walked this same route—Poles, Gypsies, homosexuals, Jehovah’s Witnesses and, of course, Jews—on their way to torture, medical experiments and extermination.

Over one million victims died just at Auschwitz. And here I was, affluent, educated, safe, with my iPhone and my brand new Sony camera. Arriving when I wanted, leaving when I wanted, for the safety of my own lodging with medical care and freedom. It seemed so vulgar.

The barracks were all brick, as I said earlier. Not all were open to the public. Some were still being renovated. Many were dedicated to certain victims. There was one dedicated to the Poles who were murdered. One dedicated to Roma deported to Auschwitz. Another to deportees from Belgium and yet others for deportees from France, Hungary and the Netherlands. One barracks showed bunks, somewhat like those I saw at Dachau last year.

Look close and you’ll see the hook on the gallows.

Another was dedicated to extermination and the desecration of corpses. This one rattled my cage. There were vivid photos of murdered babies. Photos of dead families, perversely lined up in their Sunday finest. There were photos of victims from medical experiments. Yet, strangely enough, the hardest photos for me were those depicting Jewish families on holiday at the seashore or having family picnics followed by detailed information about their slaughter.

Hundreds of photos lined walls of victims showing their ages, birthplaces, and occupations. So many artists, painters, writers, intellectuals, musicians, engineers, professors, singers. I was sick. To think that so much human talent had been extinguished by sub-human monsters solely because of said monsters’ misguided belief that someone else wasn’t fit to live. I couldn’t help but wonder what these people might have achieved for mankind had they lived. 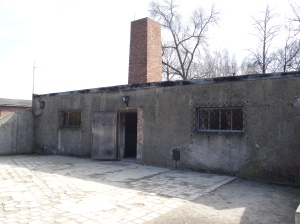 But, in a sick way, did they actually achieve something for mankind? Something against their will? A reminder never to hate?

Perhaps the psychological torture affected me the most. Efforts to destroy a person’s humanity, belief in God, faith, identity, sense of hope, spirit–all these tortures were there, even in the minutest form. The monsters seemed to be terribly adept in their wickedness, constantly finding new ways to attempt to crush their victims’ spirit.

Yet, ironically, since they considered their victims subhuman, didn’t they actually subconsciously admit that their victims were human by attempting to destroy their humanity?

Despite unconscionable suffering–art, music, generosity, kindness. An imprisoned doctor surreptitiously created a medical clinic. Jehovah’s Witnesses shared meager rations with those who were sicker than they. Diaries were kept, songs composed. Art was created–many murals and drawings are displayed at Auschwitz.

This, for me, is a message to the Satanic forces and despots that exist in our world (ISIS, Vladimir Putin, Assad, Boko Haram, white supremacists). Never will the human spirit be completely extinguished among one’s enemies. Beauty and truth will always exist and even flourish and it will remain to bless and educate millions in the future, long after the victims and the perpetrators are gone. Beauty and truth will never be eliminated.

And yes, I say Satanic forces. I don’t believe that a human can conjure up such vile, sick, unimaginably reprehensible hatred and then perpetrate such cruelty against another fellow human on one’s own. There must be a source.

Me and my pontificating. Onward.

Moving on, there were rooms with huge displays of human hair, shoes and luggage with owner’s names stenciled on the outside. Another huge display showed thousands of hairbrushes and shaving brushes. A small display case featured toddler clothes, shoes and bonnets. I literally had to lean against a wall.

This is how people look when they emerge from the gas chamber and crematorium.

The displays I read voraciously. I dislike tours because you must follow their schedules. I want to take my time. In doing so, I found that among the monsters’ tortures was a pressure chamber. I didn’t see anything that described it, but my mind wandered and I pictured some kind of a room that was either hugely pressurized or hugely de-pressurized while people were in them. I felt the walls closing in around me.

Sometimes you just have to sit down after what you’ve witnessed.

Outside, at one end of the camp, was a post where prisoners were hanged. At the opposite end of the camp was a wall where prisoners were shot to death. Completely surrounding the camp were barbed wire fences with another seven-foot cement fence further beyond—as if anyone was healthy enough to attempt an escape. Although, some did manage to do so.

I was shocked at the carnage inflicted just on the Polish people. The monsters wanted to destroy Poland’s national identity and replace it with a Germanic one. Children were not allowed an education beyond fourth grade; they were to be taught that obedience to Germany was God’s way. It was determined that young Poles didn’t need to learn to read.

The murder of children probably bothered me the most.

In the building reserved for the Polish victims, I found a large binder with the names of victims. I thumbed through it searching for a Bakun, Dlugosz or Sawczuk. I found no Bakuns. But I did find a few Dlugosz names and a few Sawczuk names. I don’t know if I will ever be able to determine if they were distant family members. I photographed the pages. 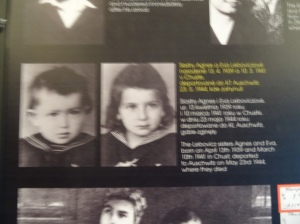 Auschwitz was originally built for Poles, but eventually became an extermination camp for Jews. Jews were brought from Belgium, Czechoslovakia, France, Greece, Italy, the Netherlands, Norway, Serbia, and Ukraine to be destroyed. At one point, the backup of victims was so bad that bodies were stacked at the incinerators waiting to be cremated while corpses lay in the gas chambers. Meanwhile, unknowing victims waited outside the gas chambers for their “disinfecting shower” while people were at the platform for “separation” (where some were deemed fit to work and the rest went to be gassed) and yet others sat on the trains waiting to be processed for separation.

The incinerators were intact. There was a sort of assembly line whereby it appeared that bodies would be placed on a conveyor to go into the incinerator. Victims were crammed by the hundreds into the gas chambers where innocent-looking shower heads gave the impression of an impending bath. Ultimately, canisters of Zyclon B were released to murder them.

As I read information, I became impressed with the Polish resistance. We have never heard a lot about them, but several hundred thousand were working throughout Poland, as well as in France and Great Britain, against the monsters. A Polish submarine was able to escape notice by the monsters when it slipped out of Tallinn, Estonia making it safely to Britain where it was used to fight against the Third Reich. When Warsaw was liberated, Poles were allowed to raise their flag over the city in a gleeful nose-thumbing sign to their defeated enemies.

Auschwitz is something that every citizen on earth should see. Especially Arabs. Does that sound prejudiced? I don’t care. This type of carnage is still going on with ISIS and Boko Haram. “Those who do not remember the past are doomed to repeat it”. Well, there are those who have no clue about the past and look at what is happening.

I’m glad I went even though I was warned it would be difficult. I wish every American could see it. Perhaps it would help bring civility back; perhaps it would provide a greater worldview beyond the latest hit movie or iPhone release. 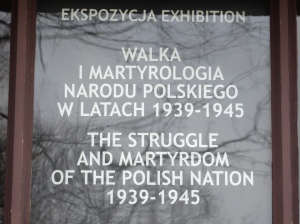 Perhaps it would, at the very least, make us think.

2 thoughts on “Auschwitz–what a way to spend Palm Sunday”