A bit of a detour.

Today I got the opportunity to go to Carnevale in Ascoli Piceno, a medieval celebration that the city has thrown for decades. It lasts for six days. My cousins have told me about it countless times. Indeed, my first image of my cousins is from a photo my father showed me when they were very young, decked out in their best homemade costumes.

When my cousin, Maurizio told me Carnevale would be happening this weekend, I immediately decided I would go. I have to admit that my expectations were different from what I experienced. I was expecting jousting tournaments and flag competitions similar to Under the Tuscan Sun. Not on this night.

I took the train from Alba Adriatica to Ascoli Piceno, arriving about 5:00 p.m. Upon leaving the train station, I encountered hundreds of people streaming toward the Piazza del Popolo where the majority of activities occur. I had been in touch with my cousin, Maurizio, and his son, Stefano, to determine a meeting place.As I walked, I passed numerous people in various costumes. Approaching the first plaza, Piazza Arringo, I found hundreds of people milling about. The cafes were jammed. Napoleon approached me and our eyes met. A corpse was carried in a coffin. Pink pigs waved. I had reached Carnevale and I wasn’t even in the main piazza.

The crowds in Piazza Arringo were thick. Walking was practically an impossibility. Trying to find a shortcut was even harder. I was anxious to join Maurizio and his family but I resigned myself to moving with the crowd.

I noticed as we inched slowly along that few people were dressed up. That would soon change. Nearing an intersection, we were approached by a herd of bipedal bovines waving to the crowd. Lady MacBeth sauntered by followed by a cowboy. Various children were bedecked as puppies, tigers, kittens and teddy bears as they were carried on their papas’ backs.

Princesses scurried underfoot. Medieval courtesans mingled about. It started to get more colorful. Nearing the Piazza del Popolo, it became apparent that the activities were more celebratory there.

I went to a café to get a panini. Maurizio and his wife, Daniela, met me there. After I finished eating, we went out into the crowd. In eighteen years of visiting Italy, I had never seen so many people in this piazza. And I had certainly never seen a crowd like this.

The costumes were more outrageous. Several people had set up temporary booths where they entertained the crowd and told jokes or acted skits. Two toilets walked by. A small group of people dressed themselves as signs that described via drawings inappropriate things to do to one another such as smashing testicles with a hammer, emailing while on the toilet and igniting a rectum.

Many of the caricatures and jokes were off-color. However, they were nothing compared to what is currently shown on America television. In fact, I found them whimsical and creative–and FUNNY. There was no attempt to be vulgar; some of the humor was just a little blue. 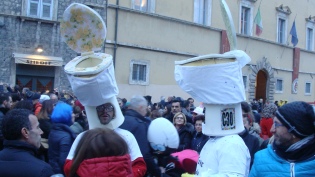 Walking on, we found a booth two men had set up with a plastic window showing them dangling from a beam, dressed as bumblebees, entertaining the crowd. A stage featured different people dressed in every imaginable costume swaying and lip-syncing to music blasting from a loudspeaker. A tower greeted us. A six-foot ear followed.

A number of men were in drag that shouldn’t have been. Witches and pomegranates paraded around. Jesus Christ chastised former Prime Minister Silvio Berlusconi for his tax laws. In an ironic juxtaposition, an index finger stood nearby–extended.

We squeezed our way through the mob and found a man dressed as a car receiving a ticket from a bosomy male officer carrying a “No Parking” sign. More cows approached. An eight-foot Easter egg told jokes to the crowd. Beyond was a partial deck of playing cards ambling around.

We walked out from the piazza and met some friends of my cousin. After chatting we turned down a side street and met Satan. We continued down the street viewing more adorably clad children on their papas’ backs along with court jesters and a man with a fake saw through his head. I saw dead people.

After walking a few feet, we came upon another makeshift stage where three VERY loud men dressed as astronauts were talking rapid-fire about women in space. They deftly explained how important it was for women to have equality—as long as they continued to wash their men’s boxers and bikini briefs that were hanging over the stage. 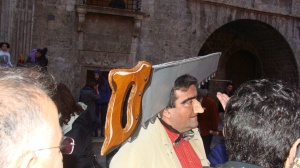 When the little show ended we turned to leave only to be welcomed by six walking trashcans immediately followed by six corks. Following them were six orange penises.

We turned around and saw two milkmen pulling a life-size papier-mâché’ cow on a cart. Two of Satan’s spawn ran down the street. In keeping with the toilet theme, a man had one attached to his lap.

By this time, we had been walking and milling about for probably two and a half hours. We started back to Mauri’s car, once again going through the Piazza del Popolo. The scene had changed. New stages and booths had been set up and more characters had arrived. A man on stilts dressed as a bride lamented that he couldn’t find a husband tall enough. A male Rapunzel, clad in a gold cape, chatted with strollers. Smartphones congregated.

As we walked, the scene continued. Bravehart approached, menacingly. Several more cows mooooved along. Sex kittens observed an open book. Too many middle-aged men, dressed in drag as old ladies with indeterminate breasts, rode bicycles through the crowd. There were soldiers, knights, queens, damsels, Goths, the Angel of Death.

It was actually a fun time. It was very festive, very entertaining. If I hadn’t needed to catch the train home, I would have stayed longer. The costumes inspired me. I told Maurizio that, if I’m still here next year, we need to dress up and join in. I’m thinking of going as a pair of lips.