I re-read a posting from early November. I also looked back at some photos from a year ago. Isn’t it amazing how much can change in such a short time? 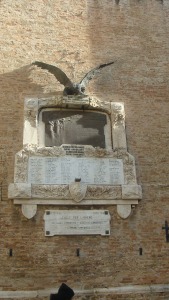 Last year in January I had just returned from spending the holidays in Italy, Paris and Amsterdam. At the time, I had no idea I’d end up moving to Italy later in the year. By early November of last year I was preparing for my relocation. When I re-read my postings, I was immediately catapulted back to January and early November and my mindset at the time.

When November arrived, I was filled with excitement. And just a bit of concern due to the unknown. Now, in only two months of living in Italy, I have already become acclimated to the point where I have a good life and feel completely comfortable. Nothing feels strange. I have my routine. I’ve got a tutor. I’m starting to travel around the area. I’ve got a trip to Sicily scheduled for my birthday and I’ve got my visits to Lviv, Ukraine and Krakow, Poland arranged to research my next book.

It was eye-opening. I guess I didn’t expect so much from myself. I think, to a degree, I felt that I would just kind of isolate myself so I could be alone and travel around, experiencing the delights of Europe, only coming out at night like a vampire or something. This has shown me that I can rise to the occasion when I need to. It has shown me that, if it’s something I want, I will go for it. Hell, I made it to Italy, didn’t I?

Today I took a 32 mile bike ride. My first bike ride in five years. My thighs were killing me, but I felt great even though I collapsed into bed for a nap (because I’m an old fart). The weather has been magnificent. Not hot, but not cold, although the evenings can get quite chilly.

I mention these things because they all add to my quality of life and my desire to actually make a life. I mean, I live on the Adriatic Coast, for crying out loud. In ITALY, for Pete’s sake. Why am I not at the  seashore every day? I can write there. The street facing the sea is lined with restaurants, bars and cafes. I need to take advantage of everything available to me.

And the other day I went to a small community called Grottamare, It means “sea cave” in English. A few weeks ago my aunt’s nephew, Guido, took me there. It was during the holidays and everything was lit up. The streets were something out of a movie set. It was so magical that I didn’t want to leave. Then and there I knew I would come back.

Well, I finally did. And I took a ton of photos. The sun was out and there wasn’t a cloud in the sky. It was quite warm, especially in the leather jacket I had worn in case it got cold. I looked like a total tourist in my Nikes and Levi’s 501 jeans, sweating to death as I carried my camera in its case along with a satchel containing my laptop. I had to walk up a hill carrying all this detritus to get to the ancient section of the city. Unfortunately, I couldn’t eat when I got there because every restaurant and cafe in the old section was closed (this means I’ll have to return, damn). But it offered me an opportunity to experience this quaint town again.

And it encouraged me. I have to admit that, although I’ve been doing all these things to create a new life, sometimes I find myself a bit intimidated to do something new because I’m fearful that I’ll screw it up. (Look back a couple of blog postings and you’ll see what I mean!) The trek to Grottamare was uplifting, however. By taking the trip, I became more familiar with the train system, and walking around snapping photos gave me the desire to visit yet more towns. Friday I’m hoping to visit Colonella, another enchanting town Guido showed me.

It’s also more than intimidation, too, that prevents me from stepping out more. Sometimes I find myself worn out from learning. I know I spoke of this a few weeks ago. But it does wear on a person. I love learning new things. I love being challenged. I love new experiences. I love being swept away by something so magnificent that I have to pinch myself to convince myself that it’s real and it’s right in front of me. Yet constant learning can overwhelm a person. Virtually everything I do is new and must be acknowledged and accommodated mentally. No one is going to accommodate me. And that’s to be expected. But I have to admit there have been times when I’ve just plopped myself in my apartment for a couple of days and streamed Carol Burnett episodes.

I’ve been been motivated to research other towns further down the “heel” of Italy. Grottamare’s experience did that to me. I’ve come across one town called Lecce that looks absolutely fantastic. It’s four and a half hours by train which means I can make a long weekend out of it. It is off the beaten path because it’s waaaay down the coast. Apparently Helen Mirren “discovered” it. I don’t know if it was during a film shoot or what. Nevertheless, I’m a fan of out of the way places and, from what I’ve read, Lecce fits the bill. Few people speak English which will require more understanding on my part. More learning! Guess these fits of weariness I have don’t last too long.

My living standard is also completely different from what I’ve had for decades. I’m back living in an apartment, something I said I’d never do. It’s very small. It’s in a security building with marbled floors. The floors in the apartment are tiled. Indeed, you’d be hard pressed to find carpeted floors in Italy.

But I don’t have a microwave and that does kinda grate on my nerves. My kitchen is tiny and spartan; there’s barely any room to create a meal. The fridge is small and I have very little storage space. The living area is minuscule.

Yet I don’t care. Even though I spend most evenings in my apartment, writing. During the day I’m usually not here. And I don’t need that much space. I don’t even use the living area and I barely use the kitchen because I eat out so much. (I get a HUGE plate of spaghetti for $6.) I don’t have a ton of possessions. I brought two large suitcases and two small ones. And they just had clothes. Other than a few housewares, I’ve not bought much. This has been a reawakening.

I also spoke on this before. I’m finding out how much I truly need. My life is filled with experiences and I don’t have the time or the wherewithal to fiddle around with “stuff”. I do try to buy something memorable when I travel, as a memento, but that’s it. Other than that, I guess I just don’t have the time to deal with unnecessary things.

If I return to Oregon I doubt I will go back to the suburbs and accumulate. I see how much I need to be happy in the way of possessions, and it ain’t a lot. I’m in Italy, why would I want to spend all my time buying stuff when I can be out soaking up local color?

And I have to admit, when I’m out in these historic towns, I start to feel like I’m in Italy again. Living here in Alba doesn’t feel like Italy. Despite all the people around me speaking in Italian, it can feel very American. Everything is new, there’s two shopping centers ten minutes away. There’s nothing historic.

But when I visit these other, ancient towns, it’s almost like “Calgon take me away”. I’m swept up in the mood and the atmosphere. I forget everything and drink in the beauty. I feel like a tourist again and that’s kind of what I want. I don’t want everything to be so familiar that it loses that charm.

But if I remain, that exact thing will probably happen. I don’t know if I would ever become as jaded as Italians who kind of dismiss these towns and their history. The only person I know who really engages with the culture and history is my cousin, Maurizio. But everyone else goes on with their lives. Sometimes, I want to shake them and say “LOOK!”

Yet, would I become lackadaisical in my attitude if I remain? Perhaps if I had a nine-to-five job here. If I were able to keep writing and have my own schedule and support myself in a manner different than that of a corporate cubicle, then I’m sure I would continue to appreciate what surrounds me.

I’ve been tryin’ to get down to the heart of the matter and I’m not sure there is one. It’s just a jumble of things that I must address. Fortunately, I can do it.

2 thoughts on “Pursuing the expatriate life in Italy–“I’ve been tryin’ to get down to the heart of the matter”–thank you, Don Henley”