Wow. I am sitting here nursing very tender feet and toes. I think I walked more today than I did in any city in Europe. That’s the way it feels, anyway. Of course, it could be due to the fact that I’ve been walking for five weeks and my feet are screaming, “Enough!”

Whatever the reason, I’m now sitting in my hotel room and I ain’t movin’. Okay, maybe to the john, but that’s it. I wish I had a basin to soak my feet. My brother and his girlfriend arrived today and they are in their hotel room on the other side of Central Park from me. I am too tired to go and see them.

We will see each other tomorrow. The plan is to visit the Empire State Building around noon and then lunch either in Chelsea or the Meatpacking District. I guess the latter provides REALLY fresh meat. Also possibly going to a beer garden. Dinner will be at 7:00 p.m. and then the comedy club at 9:30. Apparently, my brother has it all mapped out. He’s an engineer…

So today found me all over Manhattan. What a trip. I have to admit that New York is not the what I expected. I guess I still had images of the old New York from the 70’s–gritty, dirty, crime-ridden, murders in plain sight. At least that was my impression.

The New York I experienced today is very affluent with new construction everywhere. High rise buildings with multi-million dollar condos are all over and new ones are sprouting up. Streets and sidewalks are clean. Central Park was immaculate. I was impressed with the number of people running and riding bikes. I walked for quite a distance along the Hudson River. A park lines the river for miles.

The day started out right after my first posting. I did have the continental breakfast for those of you interested. It was unimpressive–dry donuts, an elongated, sausage-like  thing, a round, yellow, egg-like thing, hard-boiled eggs, coffee, juice and cereal. Kinda depressing.

After gagging down breakfast I decided to hit Central Park. Central Park is enormous. So much so that it has a carousel, an ice skating rink and a lake. Fountains and statues dot the park. Bridges cross creeks. Benches are everywhere. There was even a small cafe inside.

I immediately started looking for Strawberry Fields, the location of the Imagine memorial for John Lennon. I am a HUGE, HUGE, HUGE Beatles fan so finding this memorial was important for me. Now my hotel is on West 71st Avenue right across the street from Central Park. Did I look at my map to seek out Strawberry Fields? No.

Instead I walked into the park and started looking. I asked a friendly young mother where Strawberry Fields was located. She told me it was right across from West 72nd Avenue. Once again, my map-averse manhood kicked me in the rear. I started off in the direction she pointed. The thing about Central Park is that you can get really turned around and I had walked as far as West 77th Street before another walker told me I was going in the wrong direction.

“Let me take you down, ’cause I’m going to…Strawberry Fields”

Well, to make a long story short, I found Strawberry Fields and the Imagine memorial. It was interesting, Dozens of people were there waiting in line to have their photo taken at the memorial. 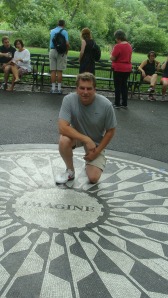 “Imagine” if John Lennon had lived

Tacky tourist that I am, I followed the crowd and asked a gentleman to take my photo. Then I walked across the street and got a photo of the Dakota Building, John Lennon’s former home and the location of his shooting. Yoko Ono still lives there.

After leaving Central Park I decided to start walking. Right across from the south end of the park I found Trump Tower. Truthfully, I wasn’t impressed. When you consider the size of Trump’s ego, one would think his tower would match. It doesn’t.

Right near Trump Tower I came across Columbus Square which was also at the southern end of Central Park. At that point, i was on Broadway. Continuing on, I quickly came upon the Ed Sullivan Theatre, the same theatre where the Beatles made their American debut and where The Late Show With David Letterman is now broadcast. 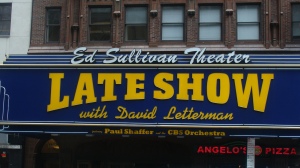 Welcome to the Late Show with David Letterman

A few blocks after that I reached Times Square. There was an electricity in the air and not just from ads. Although, I don’t think I’ve ever seen so many billboards and advertisements in one place in my life. Half were video ads. People dressed up as characters were everywhere–Mickey Mouse, Minnie Mouse, Batman, Hello Kitty. They were all there. Didn’t see the Naked Cowboy, though.

From Broadway I traipsed over to Fifth Avenue. I found Rockefeller Center where Saturday Night Live has been filmed for nearly forty years. I found Radio City Music Hall and St. Patrick’s Cathedral. I went in the cathedral and a mass was behind held. As with many of the European cathedrals, photos and video were not allowed. I couldn’t take photos outside either because the cathedral is under renovation and surrounded in scaffolding. I didn’t really care because, as I’ve posted before, I’ve seen so many cathedrals that I’m churched out.

I kept walking and decided to have lunch. I had asked the concierge at my hotel for a good burger joint. After five weeks in Europe I was dying for a good, ol’ American hamburger. The kind that drips down your arm and makes a mess. The kind that would even make the Queen of England look like a pig in a tiara if she ate it. The concierge recommended Bill’s Bar and Burger.

I found a Bill’s Bar and Burger by happenstance and went in. It gave me a chance to rest my throbbing feet. I ordered a regular burger with guacamole and proceeded to make a mess. But it was a delicious mess.

Back on the street, I trekked onward. In the distance I saw the Freedom Tower on the site of the Twin Towers that were downed by Islamic terrorists on 9/11. I zeroed in on that site as my destination. I walked through the outskirts of Greenwich Village, Soho, Chinatown and Little Italy and found the Freedom Tower.

It’s an impressive building, covered in glass with unique shapes. Workers are still putting on the finishing touches. There are a number of other buildings that have either been constructed or are under construction in the area. The collapse of the towers devastated the entire area. You can’t have two 1700′ towers collapse and not have it impact buildings nearby.

There is a museum at the former site of the Twin Towers. There are also two memorials which are quite beautiful along with a park. The two memorials are separate and similar. They are square waterfalls dropping down into a pond and then dropping down into a smaller square hole that looks like a bottomless pit. You cannot see into this hole. The four sides of each memorial have the names of each victim from the collapse of the Twin Towers etched in the granite. On the birthdate of each victim, the 9/11 memorial places a rose on the victim’s name. There was construction on what appeared to be another part of the memorial. I couldn’t make out what it was. I guess I’ll just have to come back. 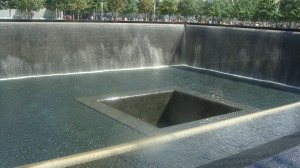 The weather started out cloudy and humid. By noon, the sun had broken through and I was pitting out. Of course, I had been pitting out all day because of the humidity. When I start walking, I’m a man on a mission and I want to get to my destination. In this regard, I fit right in with most New Yorkers who are singular in their quest to reach their destination.

From the memorial, I was going to walk to the Staten Island Ferry. I had been told that the ferry is free and it is possible to get great views and photos of the Manhattan skyline as well as the Statue of Liberty. I walked along the Hudson River promenade, fully expecting to get to the ferry. At a park, I stopped at a halal stand for some lamb and rice. After finishing my dinner, I realized that I did not have it in me to continue. I opted to head back to the hotel. It was 5:00 p.m. and my feet were throbbing more than they ever had in my life.

Looking at my map, I reasoned that I could make it back to the hotel on foot. I once again started walking along the Hudson River promenade, admiring the yachts, the high rise condos and the ferries. Ultimately, I took off my shoes due to the aforementioned aching feet. After a while I put them back on. Perusing my map, I figured I was more than halfway there. I kept walking.

I stopped again and studied my map. I was only up to Pier 40 which meant that I was only about one fifth of the way back to my hotel. Dejected, I hailed a cabbie. I felt so New York, holding out my hand confidently with two fingers up, running up to the cab, hopping in and saying “31 West 71st Street”. Just like they do on Kojak. Just like they do on Law & Order SVU.

Sometimes I impress myself so much.

So here I sit, in my boxers, feet still aching as they have been for three hours now.. It’s gonna be a TV evening with an occasional painful step out for something to drink. But I got my day’s worth of sightseeing.