I got to see my nephew! I got to see my sister-in-law! My brother finally heard from them this morning. Turned out that they were having problems with their phone connection in Bulgaria. They arrived late last night and my sis-in-law called asking us to have breakfast with them. We slept in very late and didn’t even have time to shower so we ran a comb through our hair and rushed over to her luxury apartment overlooking the Moscow River. From there we went to a local Georgian restaurant called Odessa Mama for breakfast.

Afterward,Tony returned with Anton to his apartment to meet some renovators. We went to the Christ the Savior cathedral.  This church was torn down during Stalin’s years, the marble being used for the Metro. It was re-built fifteen years ago but, according to my sister-in-law, Katia, it is somewhat vulgar because it is not the original. No matter. Barry and I couldn’t get in because we were wearing shorts. There’s a stringent dress code and apparently men showing sexy legs can’t enter.

From there we walked a few blocks to the Pushkin Museum where a showing of Peter Paul Rubens was occurring. Rubens was an Italian painter from the Renaissance period. Katia was really into his work. I wasn’t into his particular style of Renaissance work, but I do enjoy good art museums so we toured it for about an hour. I was more impressed with the statuary, much of which was from Greece and Egypt. Afterward we went across the street for coffee until it was time for dinner.

This particular bistro is a hole in the wall and looks like it is out of the Soviet period. It is frequented by Russian mafiosi and oligarchs. I cannot explain to you the food we had but I can describe it. Salad is essentially greens and tomatoes piled on a plate. You grab what you want. There was a cheese “pie” that looked more like a pizza/quesadilla and it was quite good. There was also a cold bean dish and a very spicy soup. We also had some breaded fish that resembled smelt and it was very good. No dessert was offered. According to Kat, Georgians don’t have desserts. Since I judge a nation and its society by its desserts, it was difficult for me to pass judgment on these people.

I had been told that Georgian food surpasses Italian food. In my mind and according to my taste buds, it does not. It was excellent but give me my pasta any day. I found it interesting that, when eating Georgian food, you use your hands. We didn’t use any utensils.

During our meal, one table of Russians kept standing up and reciting something related to their family honor. They were slowly getting drunker and drunker. Katia told us later that she overheard their rude comments directed our way because we were speaking English. Something about us being “bastards”. No, I didn’t engage them like I did the little twit in Munich. After all, I value my life and who knows which people in that restaurant were mafiosi? Katia was embarrassed; she considered them peasants for being so narrow-minded.

Say what you want about me and/or America. The fact is, we won the Cold War. Deal with it.

After dinner we went straight to the Moscow River near the Radisson Hotel for the Moscow River Cruise. The cruise started at 9:00 p.m. We had chosen a late cruise so we could see the city lights. It took awhile because it doesn’t really get REAL dark until after 10:00 p.m. I don’t know if we’re that far north, or what. Anyway, the cruise was beautiful. The Moscow River is not very wide but it is apparently deep enough for these large cruise ships (think back to the cruise ship photos I offered in Budapest) to traverse the river.

The Radisson Hotel is in a historic building, part of a collection of five buildings, all identical, known as “Stalin Skyscrapers”. Built decades ago, they are breathtaking edifices with magnificent architecture. They have since been turned into hotels, apartments and condos. 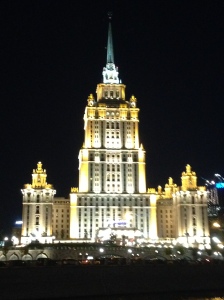 We passed the Kremlin and Red Square, Moscow University, Gorky Park, Luzhniki Stadium (site of the 1980 Olympics), the White House (yes, they have a White House, too) and New Moscow City. The White House is where Putin goes to work every day. When night fell, the city lights were beautiful. It was a pleasant night without a lot of wind, although it got cooler later.

After the cruise was over, we all went home. I started blogging, Barry got onto FB and my nephew, Anton, is playing video games on his iPad. Tony collapsed into bed.

The trip is slowly coming to an end. Still on the docket is Lenin’s Tomb and a tour of the Moscow subway. I know the latter sounds stupid but believe me, the subway in this city is bedazzling. We’ve been invited for lunch by a buddy of Tony’s. His friends Alex and Lena, who hosted us last night, have invited us again for dinner. Katia also wants to cook for us. You know, it’s nice to be in demand. 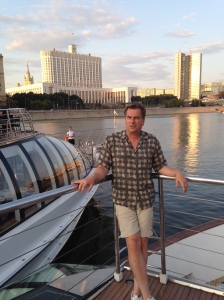